Like many of the amazing teams and leagues before us, the Oregon Reign is starting small!  We began our journey as a gay flag football team in the predominately straight league here in Portland. Our core group of guys took home a B division championship, and used our momentum and excitement to attend our first national tournament in Las Vegas at the Sin City Classic this past January.

We had a great first tournament making it to the quarterfinals in the top division while playing hard and improving each game. It was awesome to bring many of our guys to their first experience with the NGFFL and we are really excited for the future.

We have our core group of guys energized and ready to fundraise and recruit. We are planning on attending our first Gay Bowl this year in Denver and hope to build from that experience into a local league here in Portland.  So be ready everyone because the forecast for Denver is the Oregon Reign! 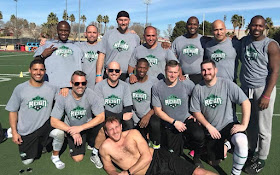